We were impressed how spontaneous the vizthink crowd came together last Monday (28. of July 2014) for a special surprise guest. Just one week in advance we found out that Brandy Agerbeck from loosetooth.com would be coming to Hamburg! Brandy loves drawing and nobody ever told her she couldn’t. Today she calls herself “a facilitator’s visual silent partner”. She is also a book author, speaker and practitioner having her own vizthink YouTube channel.

Around 60 vizthinkers joined us downtown at the XING offices to learn how Brandy uses drawings as a thinking tool and how to help groups do better work through listening, thinking and drawing skills. Thanks @Birgitta410 from @thoughtworks for bringing beer, @claracharlotte for bringing delicious muffins, @VisFacs for taking the initiative to invite Brandy and @XING_de for providing a room. Upon arriving we asked all vizthinkers to visually explain their one ‘must do’ in Hamburg for their best friend from abroad. Some all time favourites like visiting the ‘Isemarkt’, the planetarium in the ‘Stadtpark’,  taking a trip on the Alster or Elbe river, “chillaxing” at ‘Strand Pauli’ or ‘Strandperle’ were mentioned. But also some personal favourites were visualized like the public bookshelf at the church square of ‘St. Markus’ (Heider Straße 1), the ‘Petit Café’, the ‘elbgold’ and ‘Herr Max’ in the Sternschanzen neighbourhood. Find all pictures in our Flickr Album. Brandy started off by telling us that in our everyday working life we use lots of linear formats like e-mail, excel and word documents – however those are a lousy ways to process information for most folks. Visual formats on the other hand are great for kinesthetic learners as you can touch and move things around.

Brandy’s last book dealt with the process oriented topic of graphic facilitation. Graphic facilitation helps groups to think out loud and celebrate that “content is king”. It’s fast and messy so others feel they can still contribute. The visual language communicates it’s not done but you are being heard: “It frees you up to listen to others”. Brandy’s upcoming book will deal with another process oriented approach: how to use visuals as a personal thinking tool, to get thoughts and feelings out of your head and onto the paper. Mind maps are just one example.

Read more about the draw quad in The Brandyfesto. We continued with a question and answer ping-pong. One vizthinker asked whether people in meetings were not distracted by Brandy being in the room and drawing out their conversations. Brandy told us that it’s ok once she’s being introduced and it’s clear what she does. “It makes sense to them as they observe!” It’s only problematic when she works in cultures that hate transparency.

Another question in the room was what the difference between graphic recording and sketchnotes were. Brandy thinks that sketchnotes are less spacial and rather linear in comparison to graphic recordings. She encourages us to start in the middle of the page and see where the conversation is going.

We also talked about why it is that the drawing, math, dancing or singing switch is so easily being switched off due to one nasty person saying “you can’t draw, do math, dance, sing, …”. In this context Brandy asks us to watch what we are rewarding. We should not reward nice and clean pictures but instead try to understand the thought process behind them. “Let people tell you what they were trying to do – there’s often much thought to a messy picture.”

Don’t you have to be a good illustrator and understand a lot about what each client is doing in order to do helpful graphic recordings? Brandy tells us that 80% of what the companies talk about are the same topics, e.g. strategy, vision and human resources. One of the guests shares with us that it’s similar to learning how to drive a car. You learn some rules and then you practice – a lot. One way to practice your visual language skills is to listen to interesting TED talks and just do either a large scale graphic recording or a smaller scale sketchnote in your personal notebook.

Safe the date – vizthink Hamburg meets again on the 3rd of September 2014. Topic and location will be online soonish. 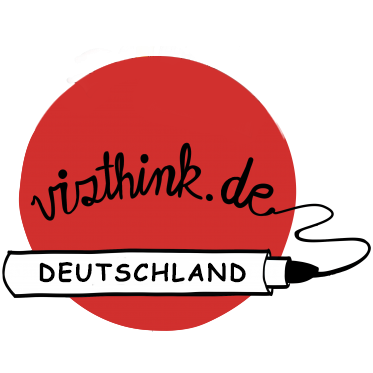